With its mysterious origin, loyalty, and unique coat, the Abyssinian cat makes for an interesting cat breed.

The Abyssinian’s actual origin is unknown and shrouded in mystery. While Abyssinian cats are thought to be one of the oldest cat breeds, their true origin is lost to the sands of time. The name Abyssinian comes from the country Abyssinia (now known as Ethiopia) where many tales place the origin of the cats. Other stories claim the Egyptian pharaohs revered the Abyssinians’ predecessor, citing the cat’s apparent likeness in ancient paintings and sculptures. Whatever the truth, Abyssinians are truly an interesting cat breed. 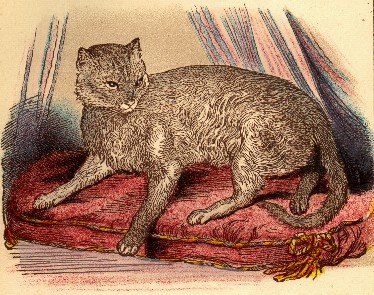 An illustration of "Zula" the first documented Abyssinian cat

Acquired by and still in the possession of Holland based Leiden Zoological Museum, a taxidermy Abyssinian cat was purchased in the early 1800s. While its origins are unknown, the cat’s label “Patrie, domestica India” suggests that it was obtained in Asia. Although the exact date Abyssinian cats arrived in Europe is unknown, in 1871 at a major cat show in London, one caught the judges’ interest and approval winning 3rd place. In Dr. Stable’s 1876 book, “Cats: Their Points and Characteristics, with Curiosities of Cat Life, and a Chapter on Feline Ailments”, there is what is considered the first documented Abyssinian cat. Named Zula, the cat was thought to have been brought back to England by a British soldier at the end of the Abyssinian war in 1868. This is the most likely the start of the modern myth that these cats come from Africa.

Abyssinians have a unique ticked coat The Abyssinian's exotic panther-like look comes from its ticked coat, stemming from the agouti gene. The coat has strands with bands of color that alternate with a lighter color at the base which grows darker as it moves to the tips of each strand. The kittens are born with a darker coat that gets lighter in color as they age. Interestingly, it’s the opposite in Siamese kittens, which are born nearly white; their coat grows darker as they grow older. The Abyssinian cat comes in many colors including blue, fawn, lilac, chocolate and ruddy (reddish-cinnamon).

An Abyssinian starred on the big screen. Disney’s 1978 movie, The Cat From Outer Space, starred Ken Barry and Sandy Duncan. But the main star was Jake/Zunar-J-5/9 Doric-4-7, voiced by actor Ronnie Schell and played by brother and sister Abyssinian cats, Rumpler and Amber. The films plot follows a UFO captained by a cat-like extra-terrestrial that is intercepted by the U.S. Military. The spacecraft’s feline pilot, who goes by the human name Jake, reveals to his captors that he must locate a substance called “Org 12” (gold) to restore his battered spacecraft and reunite with his mothership. Jake uses his collar’s technological capabilities to help retrieve the gold.

An Abyssinian cats’ DNA has been decoded.

In order to find out information about the 250 diseases that affect both cats and humans, scientists took a DNA sample in 2007 from an Abyssinian cat named Cinnamon. The sequence for the genome of the cat has helped researchers learn more about the cats’ domestication as well as discover several disease genes.

Abyssinian cats are said to be dog-like.

Abyssinian cats have been compared to Energizer Bunnies thanks to their high energy levels - but they've also been compared to dogs thanks to their individual attachment to their human family members. They have a dog-like attachment to their humans, and may have trouble sharing attention with other cats. They'll let you know when they want love and affection! And as many Abyssinian cats live 15 years and longer, you'll be in for a wonderful time of Aby love.

While purebred or pedigreed cats like the Abyssinian are simply stunning, we always want to remind our readers that there are shelter cats that are just as deserving of a forever home as a purebred kitty! In fact, purebreds often end up in shelters, despite their popularity.